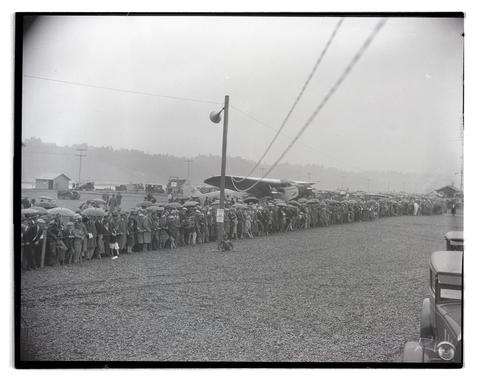 Photograph of a crowd outdoors behind a cordon. The photograph was probably taken on Sunday, June 10, 1928, at Swan Island airport during Portland’s second annual air circus. Behind the crowd is an airplane with the words “Standard of California” on the side. The plane, a tri-motor Ford-Stout owned by the Standard Oil Company, was on exhibit at Swan Island during the air show, according to a story about the event on Page 4 of the Oregon Journal on June 11, 1928. The Journal reported that more than 6,000 people attended the air show, which included stunts, races, parachuting, and a double wedding on a plane. See related image Nos. 371N1902, 371N2516, and 371N2520. Image note: The number 9 is written on the negative and is faintly visible in the lower right corner of the image.