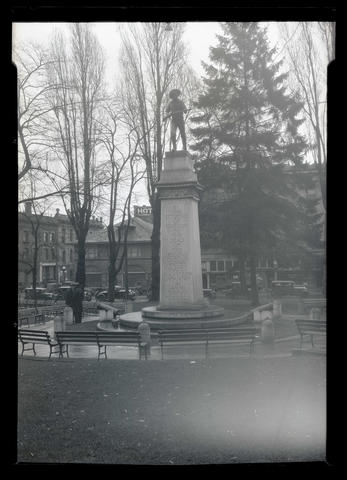 Photograph of a bronze statue of a man holding a rifle. The figure stands atop a pillar that bears the following words in uppercase letters: “Erected by the citizens of Oregon to the dead of the Second Oregon United States Volunteer Infantry / Anno Domini MDCCCCIV.” On the round base below the pillar are the words “First in Guam / First in Philippines.” The sculpture was made by Douglas Tilden and placed in Lownsdale Square in Portland, on Southwest 4th Avenue between Southwest Main Street and Southwest Salmon Street. The statue was dedicated on May 30, 1906. A cropped version of this photograph was one of 13 that were published on Page 1, Section 2, of the Oregon Journal on Sunday, March 10, 1929. The photographs were part of a “motorlog” describing a car trip around Portland to view public art. The spread included photographs of the statues and the car driven on the trip; a map of the route; and a story, headlined “Memorials Grace City / Notable Works of Art Adorn Parks and Plazas of Portland, as Motorlog Shows.” The photographs were published under their own headline and subheading: “Portland’s Statues Viewed Via Motor / Delightful Drive in Reo Flying Cloud over Route that Includes Locations of Twelve of Portland’s Art Treasures.” The tour began and ended at the Journal Building at Southwest Broadway and Yamhill in downtown Portland. The Spanish-American War memorial was stop number 1 on the trip. See related image Nos. 371N5421, 371N5422, 371N5461, 371N2898, 371N2899, and 371N2900, which were also part of the spread. Image note: Light leak on negative.