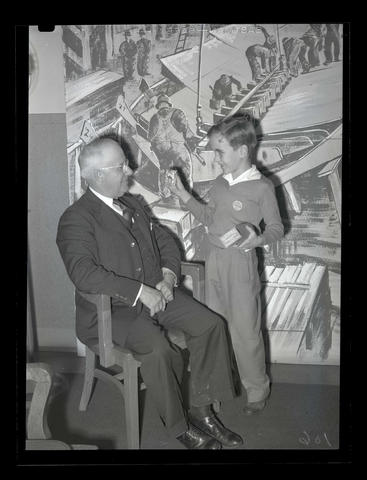 Photograph showing Sid Woodbury IV showing a box of Camel cigarettes to Albina Engine & Machine Works president George Rodgers in October 1942. Rodgers is sitting in a chair and Woodbury is standing next to him and smiling. A cropped version of this photograph was published in the Oregon Journal on Sunday, October 25, 1942. It had the following caption: “ASTONISHMENT was the reaction of George Rodgers, Albina Shipyards president, when seven-year-old Sid Woodbury IV told him he would match all Albina’s cigarette purchases for overseas men. He did with a check for $1,000.” The photograph accompanied a story, headlined “Boy of Seven Gives $1000 For Overseas Army Smokers.” The story reported that the cigarettes would be sent to United States troops serving in World War II in memory of Woodbury’s father, a serviceman who was killed in a car accident in 1940. See related image Nos. 375A0362 and 375A0363. Image note: The number 106 is written on the negative and is visible in the lower right corner of the image. The text “Albina shipbuilding / Packing cigarettes for armed forces / 10/24/42” is written on the negative sleeve. The exact date is unverified.