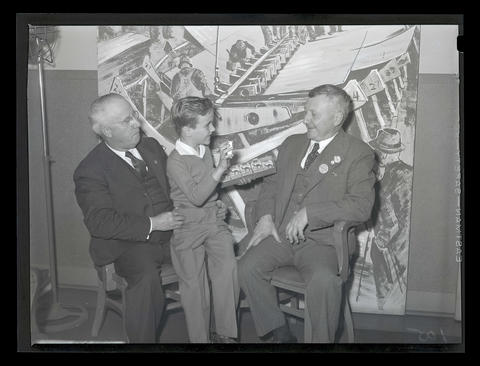 Photograph showing Sid Woodbury IV (center) with Albina Engine & Machine Works president George Rodgers (left) and his grandfather, Sid Woodbury II, in October 1942. Sid Woodbury IV, age 7, is sitting on Rodgers lap, holding a box of Camel cigarettes, and showing a pack of cigarettes to his grandfather. The photograph was taken when the Woodburys visited the Albina shipyard in Portland and offered a $1,000 match for shipyard workers’ purchase of cigarettes for United States troops serving in World War II. On Sunday, October 25, 1942, the Oregon Journal published a story about the Woodburys’ offer, headlined “Boy of Seven Gives $1000 For Overseas Army Smokes.” Accompanying the story was a related image, No. 375A0375. The story reported that the cigarettes would be sent to the troops for Christmas in the memory of Sid Woodbury IV’s father, a serviceman who was killed in a car accident in 1940. Also see related image No. 375A0362. Image note: The number 105 is written on the negative and is visible in the lower right corner of the image. The text “Albina shipbuilding / Packing cigarettes for armed forces / 10/24/42” is written on the negative sleeve. The exact date is unverified.