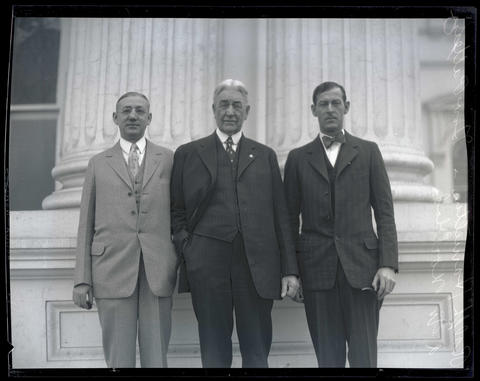 Portrait of (from right), A. W. Norblad, president of the Oregon Senate; Isaac Patterson, Oregon governor; and Ralph Hamilton, speaker of the Oregon House of Representatives. They are standing outside the Oregon State Capitol. A cropped version of this photograph, image No. 371N1483, and image No. 371N0374 were published on Page 1 of the Oregon Journal on January 14, 1929, under the headline "At the Opening of the Oregon Legislature." The photographs had the following caption: “Staff Photographer Ralph Vincent of The Journal was on hand at the state capitol this morning and brought back for you some of the interesting personages there.” This photograph had the following additional caption information: “From the left, Senator A. W. Norblad of Clatsop, president of the senate; Governor Patterson and Speaker Ralph Hamilton of the house.” The photographs accompanied a story, titled "Legislature Organizes For Session.” Also see image No. 371N1883 of Norblad. Image note: The following text is handwritten on the negative and is visible on the right side of the image: “Ralph Hamilton — Gov Patterson A. W. Norblad.” The number 10 is also written on the negative and is visible in the upper right corner of the image.