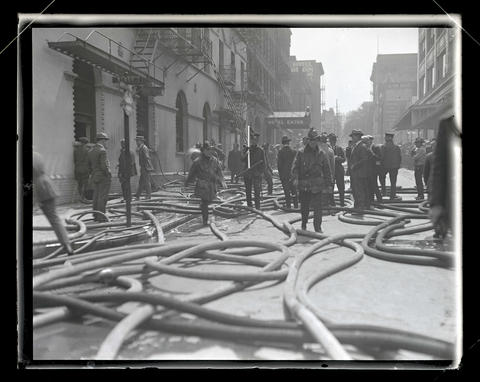 Photograph showing firefighters and others standing among fire hoses in the outside the Pacific Telephone & Telegraph building at Alder and West Park streets (now Southwest Alder Street and Southwest Park Avenue) in Portland. A cropped version of this photograph was one of four that were published on the front page of the Oregon Journal city edition on Friday, May 8, 1925, under the headline “Here Is Fire Which Paralyzed City.” The photographs had the following caption: “Photographs of this afternoon’s blaze in the Telephone building at West Park and Alder streets, which brought home to thousands how dependent they are on telephones.” This photograph had the following additional caption information: “Lines of hoses littering the streets in the vicinity.” The photographs accompanied a story headlined “Telephone Service Paralyzed by Blaze; Damage is $150,000.” The story reported: “Telephone service in the downtown district south of Washington street was completely paralyzed today, shortly after noon, when fire broke out in the basement of the Main-Atwater exchange of the Pacific Telephone & Telegraph Company, West Park and Alder streets. The fire, which is believed to have been caused by a short circuit in the multiple switch box, was confined to the basement of the building and lay like a pall over the surrounding blocks of the business district. The estimated damage to the apparatus and building, which is valued at $600,000, is in excess of $150,000.”