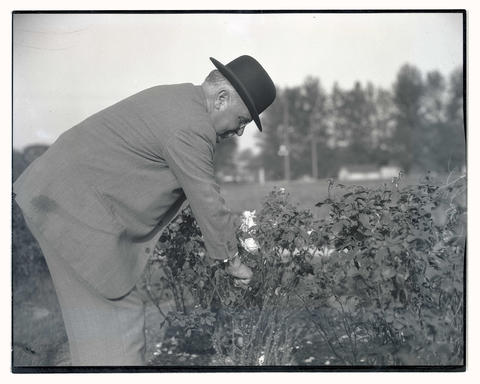 Photograph of Mayor James Rolph of San Francisco leaning over a rosebush to pick a flower after his arrival in Salem on Friday, October 26, 1928. Cropped versions of this photograph and image No. 371N2160 were published on the front page of the Oregon Journal on Saturday, October 27, 1928, under the headline " 'Here We Are, Says Mayor James Rolph.' " The photograph had the following caption: "The visiting mayor is caught in the act of helping himself to an Oregon rose. He got it in the Salem railway station parking. For it, he discarded a California geranium." The photographs accompanied a story about Rolph's visit to Salem and Portland, titled "Rolph Party Plays Golf, Goes Driving." The Journal reported that Mayor Rolph was accompanied by 20 San Francisco businessmen and officials. The group's visit on October 26-27 included a stop at the statehouse, a banquet, golf, a luncheon, and a drive on the Columbia River Highway. Image note: The name “Rolfe” (sic) is written on the negative and is visible on the right side of the image.