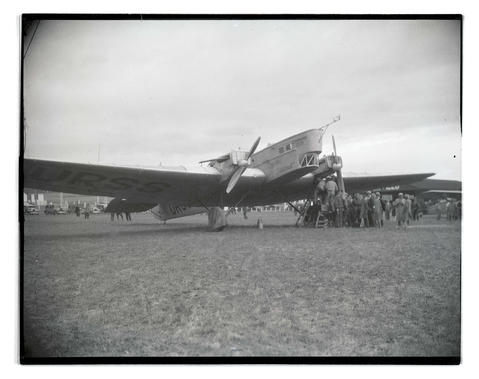 Photograph showing a group of people with a Russian airplane, Land of the Soviets, at Pearson Field in Vancouver, Washington, on October 18 or October 19, 1928. The plane developed mechanical trouble shortly after reaching Portland on Friday, October 18, 1928, during a trip from Moscow to New York. The crew landed it at Pearson Field for repairs and resumed the trip the next morning. In a story about the plane and crew published in the October 19 edition, the Oregon Journal listed the people aboard the plane as: pilot Commander S. A. Shestakov; pilot Philip E. Bolotov; navigator Boris E. Sterligov; mechanic Dmitry A. Fufaev; and Andrew W. Petroff, vice president of the Amtorg Trading corporation, which sponsored the flight. See related image Nos. 371N5537, 371N6030, 371N6031, and 371N6158.