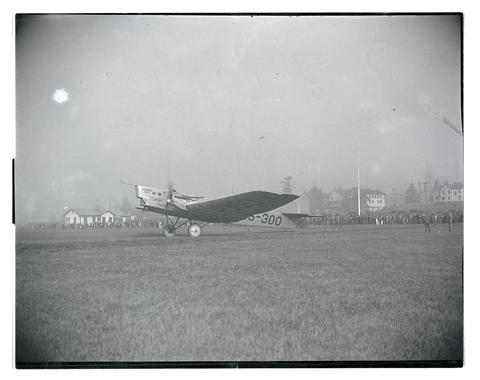 Photograph showing a side view of a Russian airplane, Land of the Soviets, at Pearson Field in Vancouver, Washington. Spectators are visible in the background. The plane and crew were on a trip from Moscow to New York. A cropped version of this photograph was published on Page 2 of the Oregon Journal on Saturday, October 19, 1928, the day the picture was taken. The photograph was published under the headline “ ‘Ship’ Takes Off For Another Hop on World Flight.” It had the following caption: “ ‘The Land of the Soviets,’ huge airplane that spent the night at Pearson Field, Vancouver barracks, after being forced down by mechanical trouble en route from Seattle to San Francisco, hopped off again at 8:45 this morning, and at 11:28 was reported over Medford on its way to the Bay cities.” The photograph accompanied the continuation of a front-page story about the plane and crew, as well as a second story on Page 2, titled “Russian Sees Airplane Lane Over Pacific.” The Journal listed the people aboard the plane as: pilot Commander S. A. Shestakov; pilot Philip E. Bolotov; navigator Boris E. Sterligov; mechanic Dmitry A. Fufaev; and Andrew W. Petroff, vice president of the Amtorg Trading corporation, which sponsored the flight. See related image Nos. 371N5537, 371N6031, 371N6031A, and 371N6158. Image note: Negative damage at upper left.