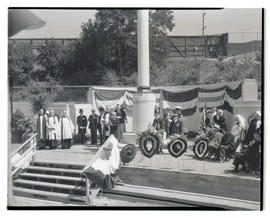 Photograph showing a memorial service honoring Canadians and Americans killed in World War I. The service was held at Multnomah Stadium in Portland on Wednesday, June 13, 1934. A cropped version of this photograph was one of three that were published on Page 18 of the Oregon Journal on Thursday, June 13, 1934, under the headline “Dedicators of Cenotaph Pay Honor to Comrades in Death.” The photographs had the following caption: “At Multnomah stadium Wednesday veterans and high civic officials of Canada and the United States joined to unveil a cenotaph memorial for war dead of both nations as symbolic of lasting friendship between the two countries. The dedication climaxed the Canadian Legion convention held here this week.” This photograph had the following additional caption information: “Just before flags of the United States, Great Britain, and Canada were raised on the towering flag pole.” The photographs accompanied a story headlined “Veterans Pay High Tribute to War Dead.” According to the story, the cenotaph unveiled at the service bore the following inscription: “In grateful tribute to the men and women of Canada and the United States who gave their lives in the World war. May their heroic sacrifice insure lasting peace among the nations. Dedicated at the Canadian Legion convention, June 13, 1934.” Also see image No. 371N3002, which may also have been taken at the memorial service. 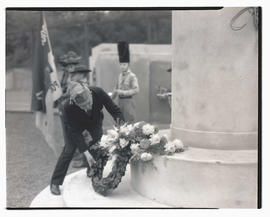 Photograph showing an unidentified man laying a wreath at a cenotaph, located at Multnomah Stadium in Portland, honoring Americans and Canadians killed in World War I. The photograph was probably taken on Wednesday, June 13, 1934, during a memorial service at which the cenotaph was unveiled. The service was part of a Canadian Legion convention held in Portland. A story about the service, headlined “Veterans Pay High Tribute to War Dead” and image No. 371N3001 were published on Page 18 of the Oregon Journal on Thursday, June 14, 1934.