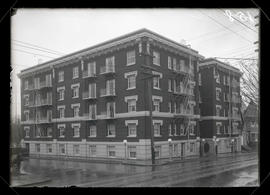 Photograph showing the exterior of a five-story brick apartment building, the Rex Arms, in Portland. A cropped version of this photograph and image No. 376G0189 were published on Page 4 of the Development Section in the Oregon Journal Year’s End Number on Friday, December 26, 1913. The photographs were published under the headline “Portland’s Apartment House Colony On The Increase.” This photograph had the following caption: “Rex Arms apartments, at East Morrison and East Thirteenth Street.” Those streets are now Southeast Morrison Street and Southeast Thirteenth Avenue. The photographs accompanied a story, which had the headline “Apartments Rise to Fulfill Demands of Growing Population” and the subheading “Seven Hundred Thousand Dollars Invested in Flats and Apartment Houses in 1913.” The story contained the following information about the Rex Arms: “On the east side, which until the last four years, had practically no apartment houses, there has risen fully half a dozen during 1913, and one of them, the Rex Arms, erected by R. W. Wassel at East Morrison and Thirteenth streets, cost $95,000.” Image note: The number 142 is written on the negative. The number 158 was also written on the negative, then crossed out.