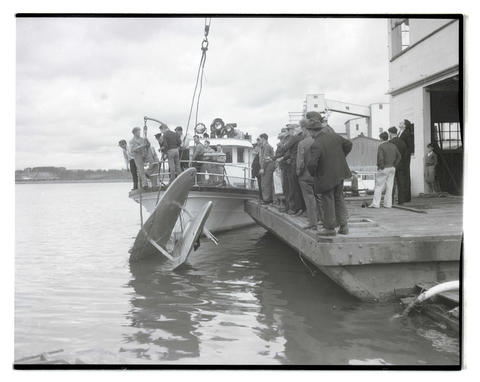 Photograph showing people standing on a barge and a nearby boat as the wreckage of an airplane is hoisted from the Willamette River by its wings on Monday, May 30, 1932. The Oregon Journal published a story about the crash and a related photograph, image No. 374N0262, on the front page of its May 30, 1932 home edition. In the story, headlined “Woman Is Killed In Plane Dip,” the Journal reported that the plane’s engine exploded minutes after it departed from Swan Island airport in Portland en route to Seattle. The story reported that the pilot, Richard P. Gleason, attempted to glide the plane back to the airport, but it plunged into the river. Gleason was badly injured, and the flight’s single passenger, Mrs. Anna Smith, was killed. See additional related image Nos. 374N0260 and 374N0261.