Item 375A1003 - Remains of buildings destroyed by fire in Cascade Locks, Oregon 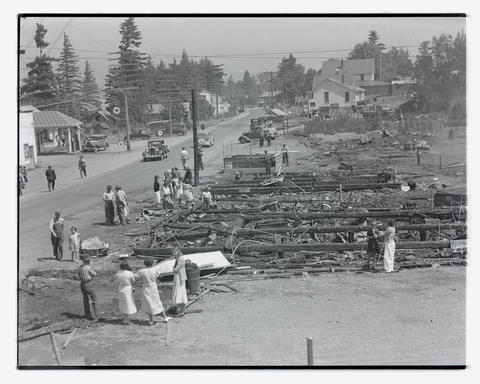 Remains of buildings destroyed by fire in Cascade Locks, Oregon

Photograph showing the burned remains of buildings after a fire in Cascade Locks, Oregon. The fire occurred on Monday, July 2, 1934, and this photograph was taken on July 3. Unidentified people are standing nearby, looking at the rubble. A cropped version of this photograph and image No. 375A1004 were published on the front page of the Oregon Journal’s home edition on July 3, 1934. The photographs were published under the headline “Where Fireworks Took Heavy Toll at Cascade Locks.” This photograph had the following caption: “The band played on at Cascade Locks Tuesday despite the $60,000 fire which concluded the second day of the July 4th celebration there Monday night. Above—Looking east from the new Lakeside hotel on the razed block. At the immediate lower left is the charred remnants of the fireworks stand where the fire started. Beyond (in order) are the ruins of the I. O. O. F building, the S. E. Parras meat market, the Blue Moon cafe, and at the end of the block the W. H. Clark home.” The photographs accompanied a story headlined “Fireworks on Rampage Burn Locks Block.” Also see image Nos. 372A0731, 372A0734, and 375A1002.