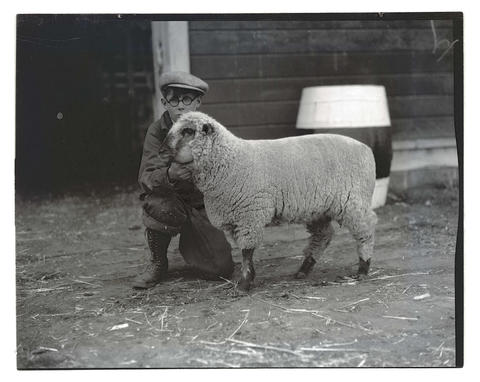 Photograph of Ray Harwood kneeling next to a sheep near the doorway of a building. The number 12 is written on the negative and is visible in the upper right corner of the photograph. A cropped version of this photograph, along with image Nos. 374N0844 and 374N0846, was published on Page 2 of the Oregon Journal on November 4, 1928. The photographs were published together under the headline “Among Blue Bloods at Stock Show.” This photograph had the following caption information: “Ray Harwood of Eugene, member of the 4-H club, and the sheep owned by him that won first prize at the Salem State fair in club entries in the fat lambs class.” Image note: Photograph shows discoloration due to deterioration of the negative.