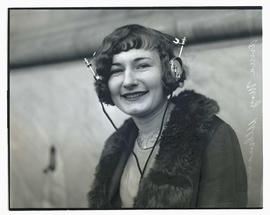 Head and shoulders portrait of a young woman woman facing left and looking toward the front. She is smiling and wearing headphones. A cropped version of this photograph was published on Page 2 of the Oregon Journal on March 1, 1930, under the heading "Tomboy!" The photograph had the following caption: "She admits it. As a matter of fact, Annamae Ullman, 19, who took the government examination for amateur radio operator's license from Edwin W. Lovejoy Friday, has made a specialty of being a tomboy since she was a little girl. She plans to become chief operator on a big ocean liner as the climax of her career." The photograph accompanied a story about Ullman that was titled "Portland Girl Masters Radio and Seeks Job." Image note: The name “Anna May [sic] Ullman” is written on the negative and is visible on the right side of the image. 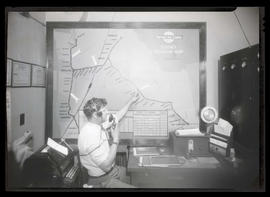 Photograph of an unidentified man in a small room, seated at a desk next to a large Varney Air Lines wall map of radio positions. He is wearing headphones and holding a microphone.