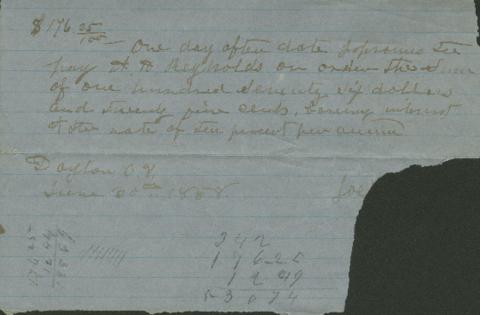 Joel Palmer, pioneer leader and author, was born October 4, 1810 in Ontario, Canada. The son of Quaker parents who moved to New York at the start of the War of 1812, Palmer moved to Bucks County, Pennsylvania at the age of sixteen. In 1830 he married Catherine Coffee and following her death married again to Sarah Ann Derbyshire (1836). Shortly after marrying Sarah, he moved to Indiana and worked on the canals. In 1843 and 1845, he served as a representative in the Indiana legislature.

During the spring of 1845, Palmer started overland to Oregon. During his journey he kept a diary of his experiences, which was published in 1847 as Journal of Travels over the Rocky Mountains.This publication served as a guidebook to immigrants for information on equipment and route details. The next year he returned to Indiana and made a second trip back to Oregon.

Palmer served as commissary-general of volunteer forces in the Cayuse War, and as peace emissary to persuade neigboring tribes not to join the Cayuse Indians. After the war, Palmer left for California and upon his return laid out the town of Dayton, Oregon, in Yamhill County, where he filed his donation land claim and built a sawmill. In 1853, he became superintendent of Indian affairs for the Oregon Territory. Serving with distinction, Palmer had the difficult task of securing Oregon lands from warring Indian tribes while preventing the outbreak of hostilities. During his tenure, he negotiated 9 treaties of cessation. He was removed as superintendent in 1857 for pursuing too lenient an Indian policy.

Palmer served as speaker of the Oregon House of Representatives in 1862 and state senator, 1864-1868. In 1870 he was defeated as the Republican candidate for governor. He died June 9, 1881 in Dayton, Oregon.