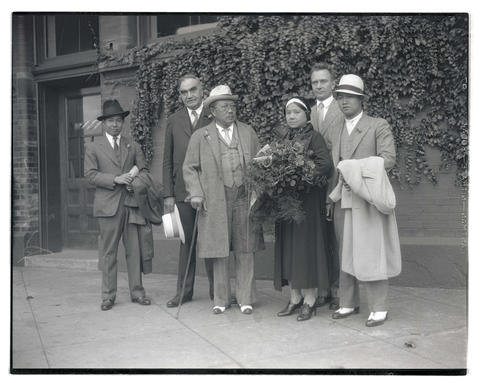 Portrait of Prince and Princess Svasti of Siam (now Thailand) at Union Station in Portland on September 5, 1931. With them are their son Prince Arjuna (left), a student at Yale University; Portland Mayor George L. Baker (second from left); an unidentified man (second from right); and their son Prince Nondiyavat, a student at Georgetown University. The family visited Portland on September 5-6, 1931, while touring the United States. A similar photograph was published on the front page of the Oregon Journal on September 6, 1931, with a pair of stories about the family and their visit. Image note: The text “Siam” is written on the negative and is visible on the left side of the image. See related image Nos. 371N2324 and 371N2326.