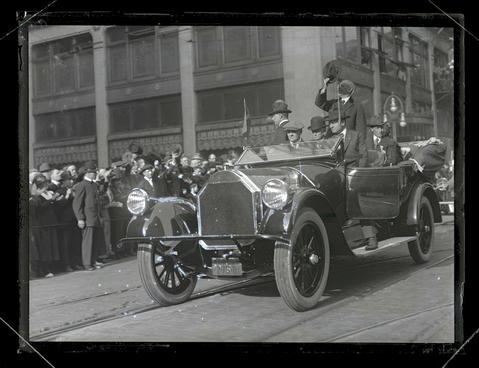 President Woodrow Wilson in car during procession through Portland

Photograph showing President Woodrow Wilson standing in the back of his car and doffing his hat during a procession through Portland on Monday, September 15, 1919. Seated next to him at right is Oregon Governor Ben W. Olcott; seated next to him at left is C. S. Jackson, the owner, editor, and publisher of the Oregon Journal. Wilson was in Portland as part of a national speaking tour to build support for the Treaty of Versailles and the League of Nations. See related image Nos. 373G0223, 373G0224, 373G0226, 373G0227, 373G0228, and 373G0538. Image note: Photograph shows discoloration due to deterioration of the negative.