2 Collections results for Portland Opera (Or.) 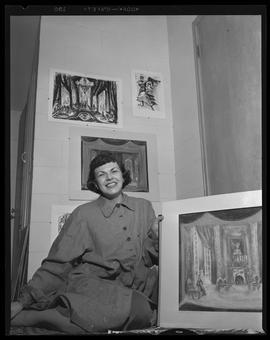 A portrait of set designer Doro Johnson, sitting on the ground next to one of her drawings, most likely at her studio at 772 S.W. Broadway Drive. Behind her on the wall are several other pieces of art. Johnson worked as a set designer for the Portland Civic Opera. A photograph from this series was published in the Oregon Journal on Sunday, October 18, 1953 (negative 1 of 5). 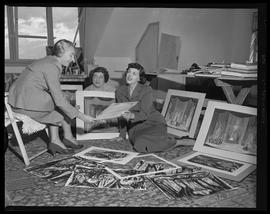 Set designer Doro Johnson (right), showing samples for the Portland Civic Opera to dancing director Catherine Cassarno (left) and secretary Hildegard Horvath. Set drawings done by Johnson lay on the ground and lean against a table. A similar photograph was published in the Oregon Journal on Sunday, October 18, 1953 (negative 2 of 5).