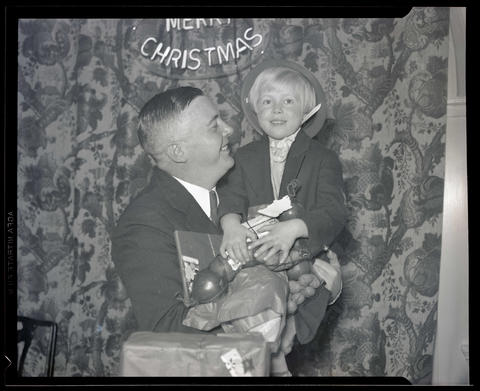 Photograph of Portland Mayor Joseph K. Carson holding a child whose arms are full of gifts. A “Merry Christmas” sign is hanging behind them. A cropped version of this photograph was published with two others on the front page of the Oregon Journal on December 18, 1934, under the headline “Breakfast Clubbers Prove Santa Real.” This picture had the following caption: “Mayor Carson holds Nina F. Holderman from Volunteers of America home, who fared generously at Christmas party staged Tuesday by Portland Breakfast club.” The photographs accompanied a story about the party, titled “Santa Claus Hails Orphans at Breakfast.” According to the Journal story, the party was held at Hotel Portland, and more than 100 children attended. The party included music and clowns, and the children were given gifts and gray tin helmets. See image No. 371N2938, which was published with this image, and image No. 371N0962, which may also have been taken at the party.