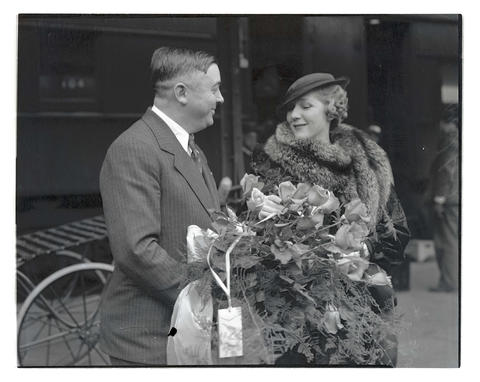 Photograph showing Portland Mayor Joseph K. Carson and the actress and producer Mary Pickford on a train platform at Union Station in Portland on Friday, May 17, 1935. Carson is holding a bouquet of roses and Pickford is looking at one of the blossoms. A cropped version of this photograph and image No. 371A6086 were published on the May 17 front page of the Oregon Journal under the headline “ ’America’s Sweetheart’ Visits.” This photograph had the following caption: “Mary Pickford, with Mayor Carson and the armful of roses ‘His Honor’ presented to her as she paused between trains at the Union station Friday morning, en route from Hollywood to Seattle, where she opens Monday night in ‘Coquette.’ “ The photographs accompanied a story headlined “Sweetheart Of America Visits Here.” See additional related image No. 372A0458. Image note: The name “Pickford” is written on the negative and is visible on the right side of the image.