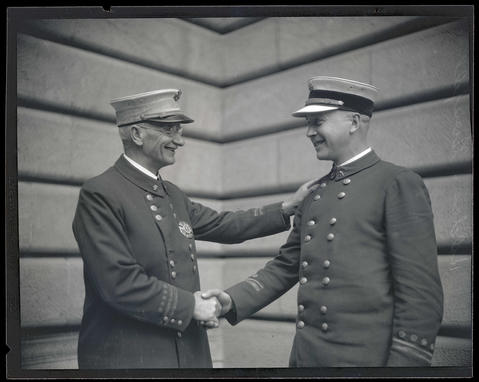 Half-length portrait of two smiling men in uniform. They are facing each other and shaking hands. The man on the left is Lee G. Holden, chief of the Portland Fire Bureau, and the man on the right is fire marshal Edward Grenfell. This photograph was published on the front page of the Oregon Journal on December 30, 1927, with the following caption: “Fire Chief Holden, left, veteran of the Portland department, who leaves the service January 1, shaking hands with Edward Grenfell, present fire marshal, who will succeed him.” The photograph accompanied a story about Holden’s retirement and Grenfell’s promotion. Grenfell took over as fire chief on January 1, 1928. The text “Holden + Grenfell” is written on the negative and is faintly visible on the right side of the image. See related image Nos. 371N0993 and 371N0994.