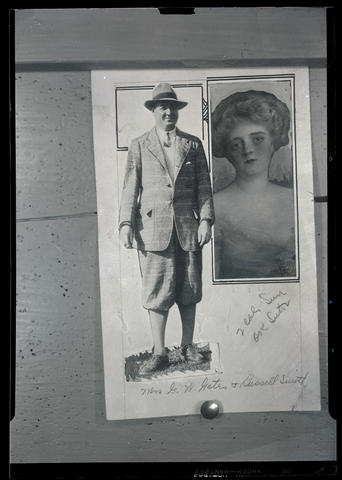 Photograph of two pictures affixed side by side to a white background. The picture on the left is a full-length portrait of a man wearing a hat, jacket, tie, and knickers. The picture on the right is a head and shoulders painting or print of a woman facing front. Written below the two pictures is the text “Mrs G. W. Gates + Russell Smith.” A cropped version of the photograph of the two pictures was published on the front page of the Oregon Journal on Monday, October 24, 1927, under the headline “Principals in $60,000 Suit.” It had the following caption: “Mrs. Adeline M. Gates, Portland widow, and S. Russel Smith, noted Pacific Northwest golfer, whom she is suing for alleged breach of promise.” The photograph accompanied a story with the headline “Love Notes ‘Pep’ Heart Balm Suit” and the subheading “Messages Indicating Russel Smith Proposed to Adeline Gates Read Into Evidence in Her Action for $60,000.”