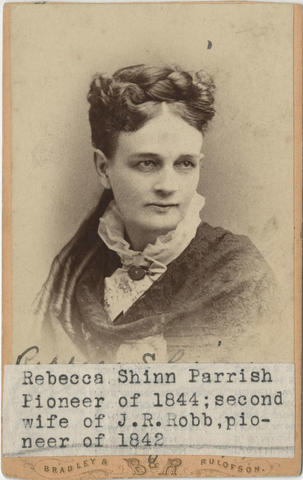 Rebecca Shinn Parrish, born March 9, 1834, in Columbus, Ohio, to Edward Evans and Rebecca (Mapel) Parrish, who came to Oregon in 1844. Her father's diary notes that she was rolled over by their wagon on the Trail, and broke her leg. Rebecca married, first, Samuel Erastus May, in Marion County, Oregon, in 1852. They divorced, and she married James R. Robb. Her third husband was William M. Steele, and they had three children: Frank, George, and Ada. She became prominent in WCTU work, and died in Turner, on May 20, 1909.