Pangborn and Herndon’s plane after landing near Wenatchee, Washington 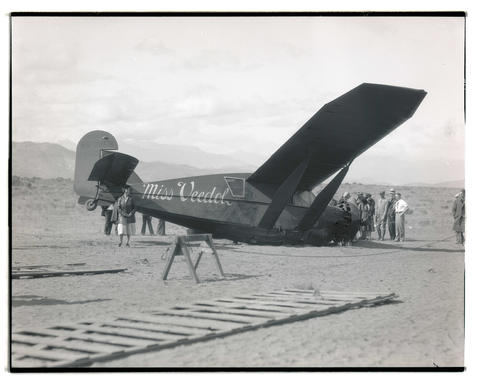 Pangborn and Herndon’s plane after landing near Wenatchee, Washington

Photograph of unidentified people gathered near an airplane lying on the ground, leaning on one wing. The name “Miss Veedol” is painted on the side of the plane. The photograph was taken after aviators Clyde Pangborn and Hugh Herndon Jr. completed the first non-stop flight across the Pacific Ocean from Japan to the United States on October 5, 1931. They won a $25,000 prize offered by the Japanese newspaper Asahi Shimbun. Pangborn and Herndon landed the Miss Veedol on its belly at the airfield in Wenatchee, Washington, without landing gear. They had dumped the landing gear shortly after takeoff to reduce weight.