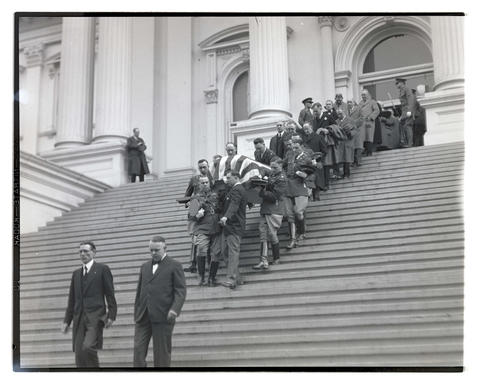 Photograph showing pallbearers carrying the casket of Governor Isaac L. Patterson down the steps of the Oregon State Capitol in Salem after funeral services on Monday, December 23, 1929. Patterson died of pneumonia on December 21, 1929. A cropped version of this photograph was one of three that were published on Page 3 of the Oregon Journal on Tuesday, December 24, 1929, under the headline “Scenes at State Funeral for Late Governor Patterson.” The photographs had the following caption: “For a brief span Monday, the mortal remains of Isaac L. Patterson reposed in state under the roof where the greatest triumph of his public life was enacted.” This photograph had the following additional caption information: “The casket being carried down from the capitol after the public funeral.” A front-page story in the Oregon Journal on the day of the funeral identified the pallbearers as Oregon National Guard captains Francis W. Mason, Glen A. Webster, Oswald N. Day, Levi L. Merrill, Joseph M. Wacklow, Patrick W. Kelley, Carl F. Glos, and William H. Lehman. See related image Nos. 371N4174, 371N4175, 371N4177, 371N4178, 371N4179, 371N4180, and 371N4181.