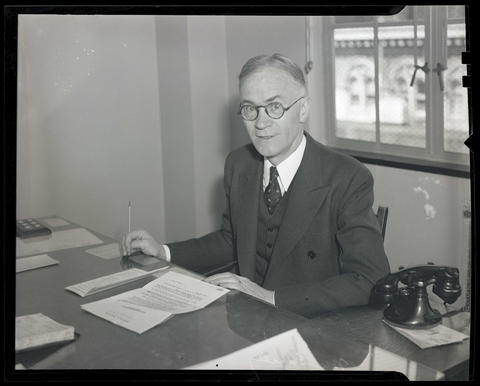 Half-length portrait of P. J. MacAuley, sales promotion and advertising manager of the Meier & Frank Co., seated at a desk on April 30, 1935. In a story headlined “Sonnenschein Assumed High Post in Store,” published on Page 4 of the April 30 edition, the Oregon Journal reported that MacAuley was retiring and would be succeeded by Hugo Sonnenschein of New York. See related image No. 372A0543, of Sonnenschein, and No. 372A0544, which was published with the Journal story. Image note: The name “McCauley [sic]” is written on the negative and is faintly visible at the bottom of the photograph. Image shows discoloration due to deterioration of the negative.