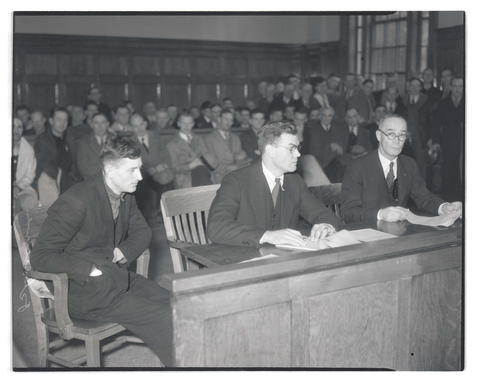 Portrait, taken from the side, showing a man sitting in a chair in a courtroom with his hands in his pockets. Two unidentified men are sitting at a table next to him, and a crowd of people are sitting and standing in the background. The name “Osbourne” is written on the negative and is visible on the left side of the image. The man may be Joseph John Osbourne, a Portland special police officer who was tried and convicted of murdering Simon Mish of Portland. Mish, age 70, was found dead in his yard on December 12, 1934. See related image No. 371N1932. Also see image Nos. 372A0795 and 372A0796, which were taken during Osbourne’s trial.