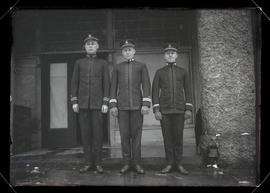 Full-length portrait of three men in military uniforms, standing in a row and facing front. This photograph, separated into three individual head-and-shoulders portraits of the men in the image, was published on Page 4 of the Oregon Journal on Sunday, April 8, 1917, together with six additional portraits of servicemen. They were published under the headline “Officers of Oregon Naval Militia.” The caption for the three men in this photograph reads: “Left to right—John A. Beckwith, lieutenant; C. J. Dyer, lieutenant, junior grade; G. E. Dow, assistant paymaster.” A story in the Oregon Journal the previous day, Saturday, April 7, 1917, had reported that the Oregon Naval Militia had been ordered to report for duty with the United States Navy. The story reported that the militia “consists of 14 officers and about 220 enlisted men.” Image note: Written on the negative are the number 165 and the names “John A. Beckwith,” “Chas E.[sic] Dyer,” and “George E. Dow.” The writing is faintly visible in the image.