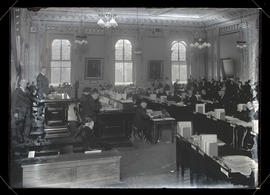 Photograph showing Oregon state senators seated at their desks in the Senate chambers during the legislative session in January 1921. A crowd of people is gathered at the back of the chambers. A cropped version of this photograph was published on Page 1 of the Oregon Journal on Wednesday, January 12, 1921, under the headline “Oregon Senators As They Look While Making Laws.” The photograph had no additional caption information. Image note: “Oregon State Senate, 1921” is written on the negative sleeve. Photograph shows discoloration due to negative deterioration. 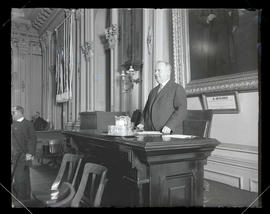 Photograph showing a man, possibly Gus C. Moser, standing at the president’s seat in the Senate chambers of the Oregon State Capitol. He is facing to the left and holding a gavel. Moser was president of the Oregon Senate during the 1917 legislative session.