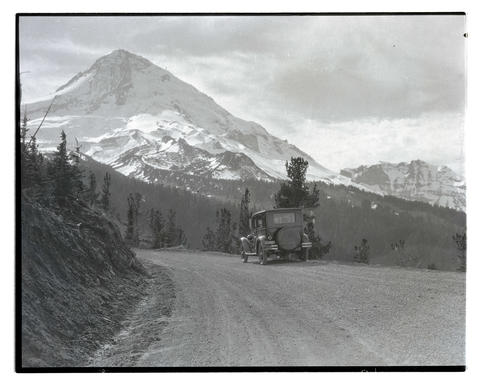 Photograph showing the view of Mount Hood from a segment of the newly completed Cloud Cap Road on the north side of the mountain in October 1926. In the foreground, an Oregon Journal car is stopped on the road. The words “Staff Cameraman” are visible on the cover of the car’s spare tire. A cropped version of this photograph was one of three published on the front page of the Oregon Journal on Wednesday, October 6, 1926, under the headline “Cloud Cap Road Is Way of Splendor.” The photographs had the following caption: “Scenes along newly-completed spur road leading from Mouth Hood Loop highway to Cloud Cap inn, giving suggestion of scenic wonders unfolded along trip.” This photograph had the additional caption information: “View of Mount Hood and especially Elliott [sic] glacier from the new road.” The photographs accompanied a story headlined “Cloud Cap Road Finished; Fine View Unfolded.” The story reported that the 10-mile-long road, ending at the Cloud Cap Inn, would officially be known as the Cooper spur of the Mount Hood Loop Highway. Construction of the road had begun in 1925. See image Nos. 374N0502 and 374N0521, which were published with this photograph, and additional related image Nos. 374N0470, 374N0472, 374N0519, 374N0522, 374N0523, 374N0524, 374N0526, and 374N0527.