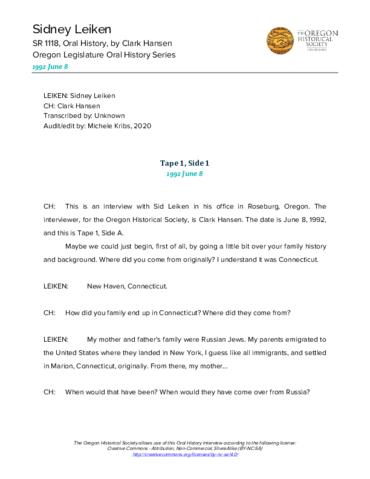 Sidney Leiken was born in Connecticut in 1916. His family was hit hard during the Depression, and he dropped out of high school to work. He joined the Civilian Conservation Corps, which brought him to Oregon. After the C.C.C. was disbanded, he decided to stay. He began working at a sawmill near Lebanon, Oregon, and started dating the owner's daughter, Thora Hult. They married in 1938 and had three children. He became a skilled sawyer, and worked primarily for sawmills owned by the Hult family, including L&H Lumber Company in Sutherlin, Oregon, until 1973. He was also co-founder, board member, and Chairman of the Board of Douglas National Bank from 1959 to 1987. Leiken, a Democrat, was appointed to the State Board of Forestry by Governor Bob Holmes. He then represented Douglas County in the Oregon House of Representatives from 1961 to 1967. He left politics when Thora was diagnosed with cancer. She died in 1969, and he remarried in 1970 to Martha Hult, Thora's sister. She died in 1987, and he again remarried in 1992, to Lillian Sissy Woodruff. She died in 2002, and he remarried in 2004 to Corrine Murphy. Leiken died in 2012.

Transcript. This oral history interview with Sidney Leiken was conducted by Clark Hansen at Leiken’s office in Roseburg, Oregon, on June 8, 1992. In the interview, Leiken discusses his family background and early life in New Haven, Connecticut, including the effect the Depression had on his family and his experience in the Civilian Conservation Corps, which brought him to Oregon. He then discusses working at sawmills, his marriage to Thora Hult, and the lumber business. He discusses moving to Roseburg, Oregon, starting a family, and getting into politics, including his involvement with the Democratic Party. Leiken talks about serving in the Oregon House of Representatives from 1961 to 1967. He describes his campaign and constituency in Douglas County. He talks about legislation, including on taxes, community colleges, timber, labor, and land use. He also talks about his fellow legislators, including Monte Montgomery, Al Flegel, Jason Boe, and W.O. Kelsay. He also discusses working on Bob Duncan’s campaign for the U.S. Senate in 1966. Leiken talks about leaving politics, his wife’s cancer diagnosis, and subsequent death in 1969. He goes on to talk about the changes in the Democratic Party since then, as well as partisan politics during his terms in the Legislature. He closes the interview with some words of advice to aspiring politicians, and a discussion of his family life.