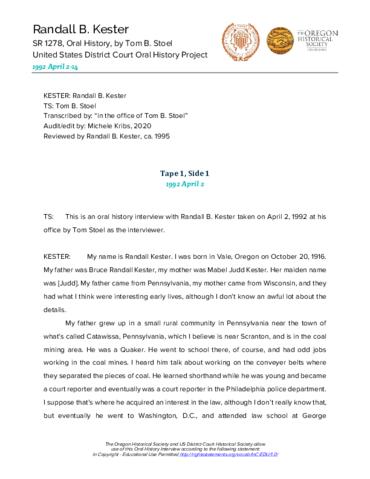 Randall B. Kester was born in Vale, Oregon, in 1916. He grew up in Bloomington, Wisconsin, and in Ontario, Oregon. He attended Willamette University, graduating in 1937. He then attended the Columbia University Law School in New York, earning his law degree in 1940. He then returned to Oregon and practiced law at the Maguire, Shields & Morrison law firm in Portland. In October 1940, he and Rachael Woodhouse were married. He served on numerous bar committees, and became president of the Multnomah Bar Association. He participated as an amicus curiae in the case of Yasui v. United States during World War II. He served on the Oregon Supreme Court from 1957 to 1958, and became general solicitor for the Union Pacific Railroad in 1958. In 1979, he resumed partnership with Maguire, Shields, Morrison, Bailey & Kester, and became senior counsel for Union Pacific. He was active in numerous civic organizations, including the City Club, United Good Neighbors, the Oregon Symphony, the Oregon Museum of Science and Industry, the Portland Zoological Society, the World Forestry Center, and the Board of Trustees for Willamette University. He received many awards for service in the legal profession. He died in 2012.

Transcript. This oral history interview with Randall B. Kester was conducted by Tom B. Stoel, Jr. at Kester’s office in Portland, Oregon, from April 2-14, 1992. Throughout the interview, supplemental items are referenced. They are part of the related U.S. District Court of Oregon Historical Society Collection, Coll 560.In this interview, Kester discusses his family background and early life in Bloomington, Wisconsin, and in Ontario, Oregon. He talks about attending Willamette University during the Depression, including his social life, some of his professors, and his involvement in student government. He then talks about attending the Columbia University Law School in New York, including some of his classes and professors. He discusses returning to Oregon to practice law in Portland, including taking the Oregon bar exam. He talks about his marriage to Rachael Woodhouse and describes the law firm of Maguire, Shields & Morrison. He talks about arguing cases in the U.S. District Court of Oregon, particularly before Judge James Alger Fee. He also describes some of the cases he handled.While Kester does not discuss his time as a justice on the Oregon Supreme Court from 1957 to 1958, an incomplete transcript of the interview contains a brief description of that period of his life.Kester discusses serving as general solicitor for the Union Pacific Railroad from 1958 to 1979. He talks about some of the cases he handled for the company, including the acquisition of the Portland Traction Company. He also discusses other cases he handled, including his involvement in Yasui v. United States. He also talks about judges he argued before, including Hall Lusk and Claude McColloch. He talks about his involvement with various Oregon Bar committees and other civic organizations. He also talks about his involvement with the Mazamas and his other outdoor activities. He closes the interview by speaking again about his work as general solicitor for Union Pacific.