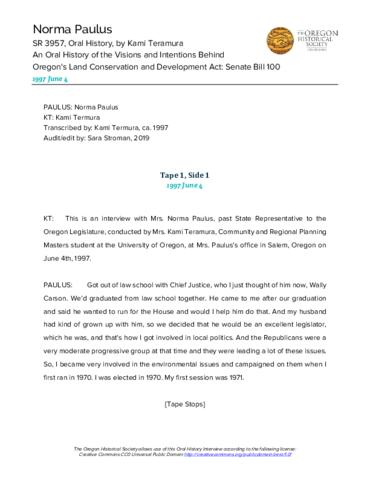 Norma Paulus was born in Nebraska in 1933. Her family relocated to escape the Dust Bowl, eventually settling in Burns, Oregon, in 1938. After graduating from high school, she got a job as secretary to the district attorney of Harney County. She later moved to Salem, Oregon, and worked as a secretary for Judge Earl Latourette; at age 24, she decided to go to law school. She took night classes at Lewis and Clark College and graduated in 1962. She passed the Oregon State Bar the same year. She met her husband, Bill Paulus, while she was at law school, and they married in 1958. She became an appellate lawyer in Salem and argued before the Oregon Supreme Court. She was appointed to the Marion County Boundary Commission by Governor Tom McCall in 1969, which was the beginning of her political career. She represented Marion County in the Oregon House of Representatives from 1970 to 1976. She then served as Oregon's first woman secretary of state from 1977 to 1985. She also ran unsuccessfully for governor in 1986. She was then appointed to the Northwest Power Planning Council, where she served from 1987 to 1990, and subsequently was superintendent of public instruction from 1990 to 1999. She later served as the executive director of the Oregon Historical Society from 2000 to 2003. She died in 2019.

Transcript. Norma Paulus discusses her involvement in the passage of Senate Bill 100 and other land use and environmental issues.