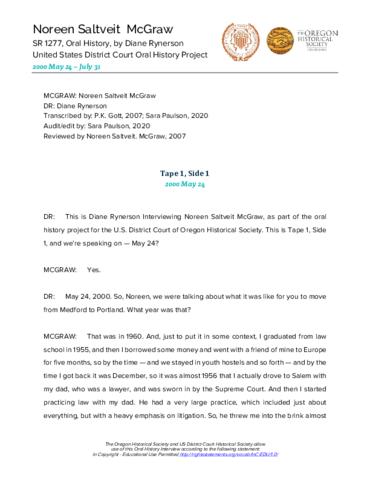 Noreen Saltveit McGraw, nee Noreen Ann Kelly, was born in 1934. She attended Marylhurst University in 1952, then graduated from the University of Oregon with a bachelor of science in law degree in 1953. She earned a juris doctorate from the University of Oregon in 1955. She soon entered into law practice in Medford, Oregon, with her father, Edward Cantwell Kelly, who later became a Jackson County Circuit Court judge. During this time, she also served as a municipal judge in Medford from 1957 to 1959. In 1960, she moved to Portland, where she was assistant attorney general with the Oregon Department of Justice under Robert Y. Thornton. That same year, she and fellow lawyer Carl Saltveit were married; they later had four children. She left the attorney general's office in 1966 and re-entered private law practice in Portland. In 1969, she earned a bachelor's degree in Spanish from the Portland State University, and in 1992, a bachelor's degree in French. While in private practice, she also served as a district judge pro tempore from 1972 to 1976. She served on the boards of the Oregon Bar Governors, the Oregon Women Lawyer's Association, and the Multnomah Bar Association. McGraw has been a panel member on the United States Arbitration and Mediation Service, the Portland Arbitration Service, and the Oregon Employee Relations Board. She has served as a reference judge for Multnomah County since 1992.

Transcript. This oral history interview with Noreen Saltveit McGraw was conducted by S. Diane Rynerson from May 24 to July 31, 2000. In this interview, McGraw discusses practicing law in Medford, Oregon, with her father, Edward Cantwell Kelly; about trying to find a job with a different law firm and the overt sexism she faced; and about working as an assistant U.S. attorney general in Portland, Oregon, under Robert Y. Thornton. She discusses some of the cases she tried, including on worker compensation. She then tells the story of defending the D’Autremont brothers in a train robbery case. She talks about practicing law while raising children; about arguing cases before U.S. District Court judges Gus Solomon and Robert Belloni; and about cases she argued in Spanish, particularly cases regarding migrant worker rights. She then talks about other women lawyers and the difficulty they had breaking into the legal profession, as well as women’s legal organizations in Oregon. She also talks about living in Mexico with her husband, Carl Saltveit, and children, as well as studying Spanish at Portland State University during the Vietnam War. She describes her involvement in Robert F. Kennedy’s campaign for the Democratic nomination for president in 1968. McGraw talks briefly about serving as a district judge pro tempore from 1972 to 1976. She discusses the increase in women entering the legal profession, particularly the number of women entering law school later in their lives; her pro-bono work for Legal Aid; and working as a criminal trial lawyer. She talks about many of the cases she worked on, including one regarding the Mount Hood Freeway. She then speaks about serving as city judge for Medford in the 1950s and appearing on the TV show “What’s My Line?” She closes the interview by discussing her experience in law school and a trip she took to Europe while awaiting her bar exam results.