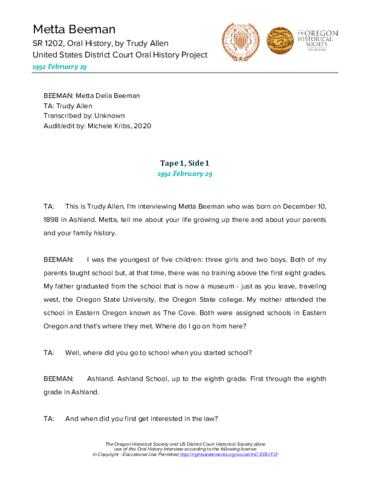 Metta Delia Baughman Beeman, nee Walker, was born in Ashland, Oregon, in 1898. She enrolled at Willamette University in 1917 and studied law there for nearly three years. She and her sister then moved to Portland, Oregon, to earn money, and she continued her studies at the Northwestern College of Law. She passed the bar and the civil service exam soon after she graduated and worked at the Veterans Administration. She and Harry Baughman were married in 1941; they later had one child. Harry Baughman died in 1964. She married Ogden Frank Beeman in 1971. She served on the State Employment Board from 1959 to 1971. When she retired from the V.A., she went into private law practice in Portland. She died in 1995.

Transcript. This oral history interview with Metta Beeman was conducted by Trudy Allen on February 29, 1992. In this interview, Beeman discusses her family background and early life in Ashland, Oregon. She talks about studying law at Willamette University and Northwestern College of Law. She talks about working for the Veterans Administration and some of the cases she handled. She discusses some of the sexism she faced in law school and in the workplace; other women attorneys; and the women's associations she has been involved with, including the Queen's Bench. She then discusses going into private practice, dealing in probate law, with her husband, Harry Baughman, and talks about serving on the State Employment Board.