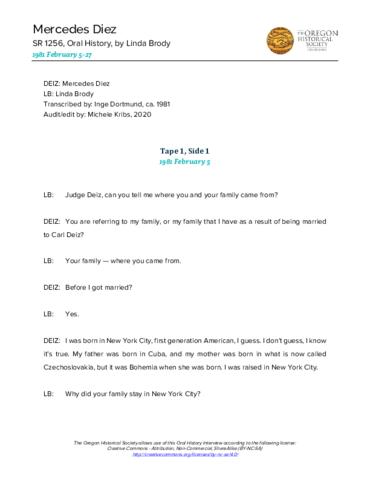 Mercedes Frances Deiz, nee Lopez, was born in 1917 to a Czech mother and a Cuban father in New York City. She attended Hunter College in New York from 1936 to 1939, but did not graduate. While she was attending Hunter, she and Billy Owens were married in 1937; they later had one child. Deiz came to Oregon in 1948 in order to obtain a divorce, which was finalized in 1949. Although she originally planned to return to New York afterward, she fell in love with Portland, Oregon, and remained. She was inspired to get involved with the NAACP and Urban League after being refused service at a drive-in restaurant in Portland, which she described as the first overt racial discrimination she had ever experienced. She met Carl Deiz while working at the IRS and they were married in 1949; they later had two children. She worked in the law library at the Bonneville Power Administration from 1949 to 1953, then as a legal secretary for Graham Walker in 1954. Walker encouraged her to become a lawyer. Walker paid the tuition for Deiz's first semester at the Northwestern College of Law. She earned her law degree in 1959. She passed the bar in 1960 and practiced law in Portland until 1967, when she became a hearing officer for the Oregon Workman's Compensation Board, the first woman to hold that position. In 1969, Governor Tom McCall appointed Deiz to the U.S. District Court of Oregon, making her the first black woman judge in Oregon. In 1973, she was elected to the Oregon Circuit Court. She took senior status in 1992. She died in 2005.

Transcript. This oral history interview with Mercedes Deiz was conducted by Linda Brody at the Multnomah County Courthouse in Portland, Oregon, from February 5-27, 1981. In this interview, Deiz discusses her family background and early life in New York, New York, including life in a large family, her experience during the Depression, and her education. She then talks about attending Hunter College in New York, and her marriage to and later divorce from Billy Owens. She discusses the reason she came to Oregon in 1949, and reflects on some of her civil rights activism in New York. She talks about her first impressions of Portland, including its social life and the racism she encountered. She discusses her civil rights activism in Oregon, and her work on public accommodation legislation. Deiz talks about working for the IRS where she met Carl Deiz, as well as their subsequent marriage. She also often discusses the difficulty of finding affordable day care for her son. She talks about working at the law library at the Bonneville Power Administration, as a legal secretary for Graham Walker, and about attending the Northwestern College of Law. She then talks about failing to pass the bar on her first try. She describes some of the cases she tried and serving as a hearing officer in worker compensation cases. She then relates the story of being appointed to the U.S. District Court of Oregon by Governor Tom McCall. She discusses her campaign to hold that seat a few months later, as well as her campaign for a new position on the Oregon Circuit Court in 1972. She describes the kinds of cases she has heard on that bench, and press coverage. She closes the interview by discussing her involvement in various professional organizations.