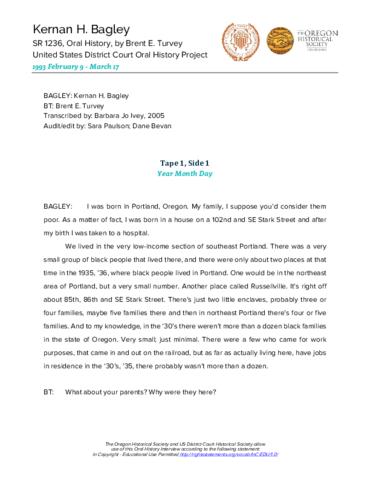 Kernan H. Bagley was born in Portland, Oregon, in 1936. Shortly afterward, his family moved to a farm in a rural area outside Portland, then called Peach Mountain. He met Shirlene Peacher at an NAACP meeting and they married in 1954. That same year, he began studying at Portland State University, but he dropped out in 1956 to support his young family. He later attended Multnomah School of the Bible (now Multnomah University) from 1964 to 1965. He began working in law enforcement, serving as Multnomah deputy sheriff from 1965 to 1976. He became deputy U.S. marshal for the District of Oregon in 1976, and then was appointed supervisor deputy U.S. marshal for the District of Oregon in 1981. Since 1993, he has served as U.S. marshal to the Virgin Islands.

Transcript. This oral history interview with Kernan H. Bagley was conducted by Brent E. Turvey from February 9 to March 17, 1993. In this interview, Bagley discusses his family background and early life on a farm near Portland, Oregon, particularly the experience of growing up black in a predominantly white area, as well as his early education and religious upbringing. He talks about the importance of role models for young African Americans, citing Multnomah County sheriff Don E. Clark as one of his own. He speaks at length about family and social values. He talks briefly about his college education; meeting his wife, Shirlene Peacher, and starting a family; and getting started in his law enforcement career. He discusses serving as a deputy Multnomah County sheriff and the discrimination he faced there. He then talks about serving as a U.S. marshal, the duties of the marshals, and the political process of his appointment to deputy U.S. marshal for the District of Oregon. He describes the popular perception of the U.S. marshals versus the reality; the process of prisoner transportation; and his thoughts on police brutality and the recent Rodney King video. He closes the interview by discussing the prison system, including its funding and effectiveness at rehabilitation.

Joint copyright for this interview is held by the Oregon Historical Society and the U.S. District Court Historical Society. Use is allowed according to the following statement: In Copyright – Educational Use Permitted, http://rightsstatements.org/vocab/InC-EDU/1.0/