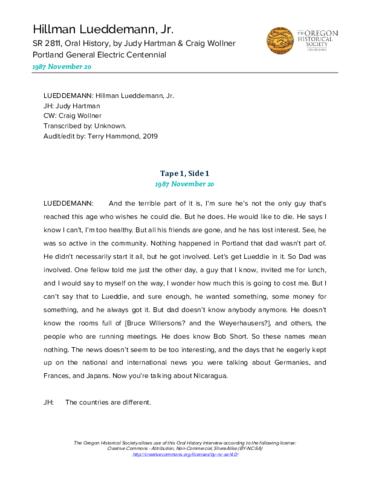 Hillman Lueddemann, Jr. was born in Portland, Oregon, in 1924. He served in the U.S. Army Air Corps as a pilot. He began working at Portland General Electric in 1964 as manager of commercial development, and when he retired in 1989, he held the position of vice president. He served on numerous boards, including those of the Portland Rose Festival, William Temple House, the Portland Zoo, the Portland Japanese Garden, and OMSI. He died in 2017.

Transcript. This oral history interview with Hillman Lueddemann, Jr., was conducted by Judy Hartman and Craig Wollner on November 20, 1987. The interview was conducted as part of the Portland General Electric Centennial Oral History Series, which marked PGE's 100th anniversary and was used in the writing of the book "Electrifying Eden." In this interview, Lueddemann discusses his father, Hillman Lueddemann, Sr., including his service on the Portland General Electric board. He then speaks about his own career at PGE from 1964 to the time of the interview in 1987. He discusses beginning his career as manager of commercial development, describes his job responsibilities, and talks about PGE's sales strategies. He talks about PGE's relationship with the community it serves, and how the relationship has changed over the years. He discusses customers' frustration over high rates, PGE's involvement in the Portland Rose Festival, and working with Portland Mayor Neil Goldschmidt and U.S. Senator Mark Hatfield. He talks about the management styles and personalities of PGE presidents Frank Manley Warren and Bob Short. He also discusses the design of the World Trade Center in downtown Portland, where PGE has its headquarters. He closes the interview by sharing his thoughts about the future of PGE.