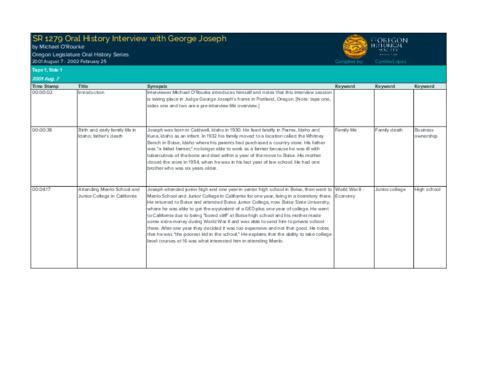 George Manley Joseph was born in Idaho in 1930. He grew up in Boise, then, at age 16, he attended Menlo School in Atherton, California, for one year. He returned to Boise and finished his studies at Boise Junior College (now Boise State University), where he earned a GED equivalent and credit for one year of college. He continued his college career at the University of San Francisco, but soon transferred to Reed College. In 1950, while at Reed, he suffered a recurrence of the polio he had contracted as a child; he underwent extensive treatment at the Idaho Elks Convalescent Home, and was able to return to Reed a year later. In 1951, he and Elizabeth Kalisher were married; they divorced only a few years later. He graduated from Reed in 1952, and went on to study law at the University of Chicago, graduating in 1954. While at the university, he met Elizabeth Starr, and they were married in 1953; they later had five children. Joseph returned to Oregon, where he passed the bar in 1955 and began working as a law clerk for Oregon Supreme Court Justice George Rossman. After deciding that a career in law wasn't for him, he instead taught law at Ohio Northern University from 1956 to 1958; Dickinson School of Law in Pennsylvania from 1958 to 1962; and the University of Arkansas from 1962 to 1963. In 1963, Multnomah County District Attorney George Van Hoomisen offered him a job, which he accepted. He worked in the district attorney's office until 1966, when he began to practice law in private law firms in Portland. In 1974, Joseph was appointed Multnomah County counsel by Multnomah County Commissioner Don E. Clark. He served in that position until 1977, when Governor Bob Straub appointed him to the Oregon Court of Appeals. He served as chief judge on that court from 1981 to 1992. He died in 2003.

Index. This oral history interview with George M. Joseph was conducted by Michael O’Rourke at Joseph’s home in Portland, Oregon, from August 7 to November 7, 2001, and on February 25, 2002. The portion of the interview recorded on February 25, 2002, was conducted at the Friendship Health Center in Portland, where Joseph was recovering from a broken leg. The first tape of this 27-tape interview features a brief overview of Joseph’s entire life and career. Beginning from Tape 2 of this interview, Joseph discusses his family background and early life in Boise, Idaho, including a store his mother ran in Boise, and the early death of his father from tuberculosis of the bone. He also describes a 1938 visit from Franklin D. Roosevelt to Boise; his awareness of the Depression; the Mormon community in Boise; and his family’s own Catholicism. He also speaks about contracting polio as a child and the lifelong physical issues it caused, as well as his memories of the internment of Japanese-Americans, and other events, during World War II. He then discusses his education, including attending Menlo School in Atherton, California, and Boise Junior College (now Boise State University) in Boise, Idaho; hitchhiking home; and his social life. He also discusses attending the University of San Francisco and Reed College in Portland, Oregon, including his social life and the development of his political views. He speaks at length about a recurrence of polio during his senior year at Reed and the extensive treatment and physical therapy he undertook as a result. He then talks about studying law at the University of Chicago, including his divorce from his first wife, Elizabeth Kalisher, and subsequent marriage to Elizabeth Starr, as well as coming to the realization that he did not want to be a lawyer. He describes Elizabeth Starr’s family background and early life, as well as their wedding and honeymoon. He also talks about his involvement with the Democratic Party, particularly acting as an alternate delegate for the 1956 Democratic National Convention.

Joseph discusses his return to Oregon in 1955 and his early legal career as a law clerk for Oregon Supreme Court Justice George Rossman. He briefly describes the judges on the Oregon Supreme Court at that time, as well as some of the cases Rossman presided over. He discusses teaching law at many different universities outside Oregon, including Ohio Northern University. He then describes working in the Multnomah County district attorney’s office under George Van Hoomisen, as well as his ambitions of becoming a judge. He talks about several cases he prosecuted and making a name for himself as a criminal appellate prosecutor; the focus of the district attorney’s office on vice cases, including an undercover operation that Joseph compromised; and civil rights cases he was involved with, particularly involving the people with mental illnesses. He talks about the creation of the Oregon Court of Appeals and the subsequent increase in the workload of the district attorney’s office; Jacob B. Tanzer and other county-level judges; and his relationship with Multnomah County sheriff, and later Multnomah County commissioner, Don E. Clark. He then talks about his brief career as a lawyer in various private law firms in Portland, his involvement in the passage of the Multnomah County Home Rule Charter, and his ongoing attempts to become a judge. He speaks at length about Multnomah County politics and Don Clark’s accomplishments as county commissioner. He talks about serving as Multnomah County counsel, including working on public power and city-county consolidation. He also discusses briefly teaching at Lewis & Clark College.

Joseph next discusses serving as a judge on the Oregon Court of Appeals from 1977 to 1992. He describes the other judges on the court, including Robert Y. Thornton, Herbert M. Schwab, Betty Roberts, Jason D. Lee and William L. Richardson. He talks about writing opinions, the types of cases he heard, and his staff. He also describes the procedures and operating practices of the court. He shares his observations on the changes in the Oregon Supreme Court since the creation of the Oregon Court of Appeals. He talks about serving as chief judge from 1981 to 1992. He closes the interview by discussing his service on the Board of Bar Examiners and his involvement in the creation of a uniform bar exam, as well as reforms that have been made to the Oregon court system.