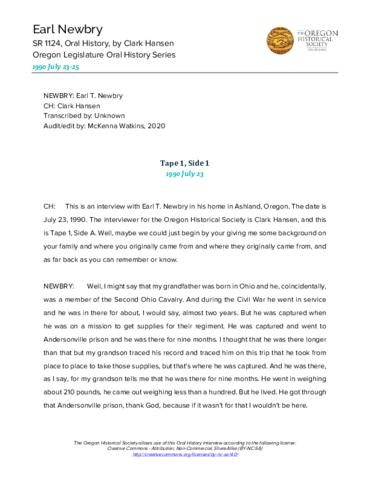 Earl T. Newbry was born in Colorado in 1900. His family moved several times during his childhood; they lived in Kimberly, Oregon; Chewelah, Washington; Eugene, Oregon; then finally Ashland, Oregon, in 1920. He briefly attended Washington State College (now Washington State University) in Pullman, Washington. His family started an orchard, Newbry Orchards, which Newbry later bought and ran himself. In 1922, he and Ruth Johnston were married; they later had two children. Newbry was active in local Jackson County politics in the 1930s. He was a Republican and represented Jackson County in the Oregon House of Representatives from 1939 to 1942, and in the Oregon Senate from 1943 to 1948. He was also appointed as Oregon's secretary of state by Governor John Hubert Hall, serving from 1949 to 1957. After leaving the Legislature, he continued to run Newbry Orchards. He died in 1995.

Transcript. This oral history interview with Earl T. Newbry was conducted by Clark Hansen at Newbry's home in Ashland, Oregon, from July 23-24, 1990. In this interview, Newbry discusses his family background and early life, mostly in Eastern Oregon and northeastern Washington. He talks about working on and running the family orchard, Newbry Orchards. He then discusses his involvement in local politics in Jackson County, Oregon. He talks about his legislative career in the Oregon House of Representatives from 1939 to 1942 and in the Oregon Senate from 1943 to 1948, including his campaigns; balancing work and family; lobbyists; and his constituency. He also discusses many of his fellow legislators, including William McAllister, Truman Chase, and Eugene Marsh. He talks about legislation he worked on, including on labor, transportation, and taxes. He then discusses being secretary of state from 1949 to 1955, as well as his 1954 run for the governor's office. He discusses the duties of the secretary of state, including overseeing the Department of Motor Vehicles. He also talks about being a delegate to the Republican National Convention in 1954 and his involvement with the Republican Party. He then discusses Oregon governors and legislators that served after he left politics, and reflects on his own accomplishments. He closes the interview by talking about his family, particularly his son, Lynn Newbry, and his political career.