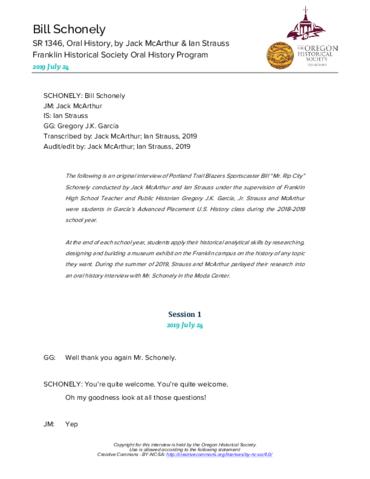 William W. Schonely, nicknamed "The Schonz," was born in Norristown, Pennsylvania, in 1929. While in high school, he worked on the school's radio show. After graduating from high school, he served in the U.S. Marine Corps and was stationed in Guam and in Quantico, Virginia. During his military service, he was a DJ, news anchor, interviewer, and sports announcer for the Armed Forces Radio. After his discharge, he relocated to Baton Rouge, Louisiana, where he covered sports for WAFB radio and TV. In 1956, he worked for various radio and TV stations in Seattle, Washington, where he announced games for the Totems hockey team for eleven years. In 1970, Schonely accepted a job offer to become the voice of the new basketball team in Portland, Oregon, the Trail Blazers. He continued to announce Trail Blazers games on radio and TV until the team's participation in the 1998 NBA playoffs. In 1999, he was inducted into the Oregon Sports Hall of Fame for broadcasting. He continued to appear as an occasional sports announcer for the Blazers. He also announced games for the Portland Beavers from 2000 to 2002. In 2012, he was awarded the Curt Gowdy Media Award from the Basketball Hall of Fame.

Transcript. This oral history interview with Bill Schonely was conducted by Jack McArthur and Ian Strauss at the Moda Center in Portland, Oregon, on July 24, 2019. Franklin High School history teacher Gregory J.K. García was also present. The interview was conducted as part of the Franklin Historical Society Oral History Program, which aims to preserve the oral history projects of Advanced Placement (AP) History students at Franklin High School in Portland. The interview was conducted in one session. In this interview, Schonely discusses his early interest in radio broadcasting, particularly his experience with Armed Forces Radio while he served in the U.S. Marine Corps. He then briefly talks about his broadcasting career after his discharge, before speaking at length about his three decades as a sports announcer for the Portland Trail Blazers. He describes receiving the job offer from Trail Blazers owner Harry Glickman, putting together a radio station to broadcast games, and the naming of the team. He shares his memories of the Portland Trail Blazers; talks about changes in management, coaching, and the players of the team; and describes the Trail Blazers' 1976 NBA championship win. He also talks about some of the difficulties the team had, including player injuries, play-off losses, and earning the moniker "Jail Blazers" in the early 2000s. He discusses being laid off in 1998 and his return to the Trail Blazers as Ambassador in 2003. He closes the interview by sharing his hopes for the team's 50th season and advice for aspiring broadcasters, and he reflects upon the highlights of his career.