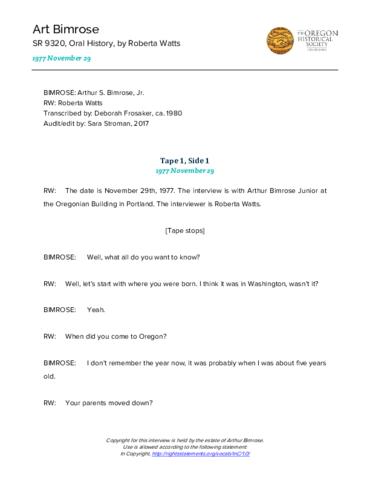 Arthur Sylvanus Bimrose was born in Spokane, Washington, in 1912. Early in his childhood, his family relocated to Portland, Oregon. He was interested in art from an early age and after graduating high school he spent a year studying at the San Francisco Art Institute. During the Depression, he used his artistic skills to make a living doing sign painting and showcard work for retail businesses, including Fred Meyer, Inc. In 1937, he began working for the Oregonian newspaper as a photo-retoucher and occasional cartoonist. In 1937, he and Olga Ann Frances Radilovich were married; they later had one child. During World War II, he served in the U.S. Army in the Pacific Theater. After his discharge, he returned to the Oregonian newspaper. In 1947, he became the paper's political cartoonist. He retired in 1983. He died in 1998.

Transcript. This oral history interview with Art Bimrose was conducted by Roberta Watts at the Oregonian Building in Portland, Oregon, on November 29, 1977, as part of the Oregon Historical Society Research Library's oral history program. In this interview, Bimrose discusses his early life, education, and early jobs. He speaks about his career as an editorial cartoonist for the Oregonian newspaper; describes his artistic process; and reflects on some of the cartoons he drew. He closes the interview by talking about the training an editorial cartoonist should have.

Copyright for this interview is held by the estate of Arthur Bimrose. Use is allowed according to the following statement: In Copyright, http://rightsstatements.org/vocab/InC/1.0/