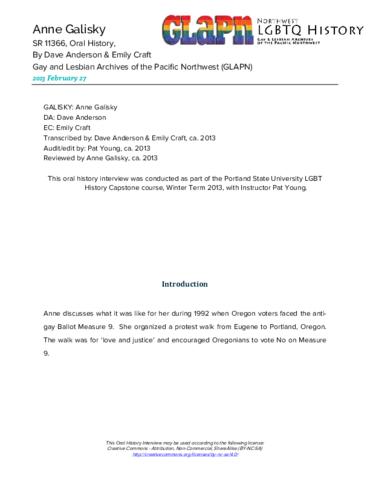 Anne Galisky (b. 1962) is the daughter of Ukrainian immigrants. She came out in 1985 and was the lead organizer of "For Love and Justice: A Walk Against Hate”, a 2-week march from Eugene to Portland in protest against Measure 9, in 1992. She worked as a carpenter and later co-founded Graham Street Productions and has directed documentaries on immigration and citizenship: “Papers: Stories of Undocumented Youth” (2009) and “14: Dred Scott, Wong Kim Ark & Vanessa Lopez” (2014).