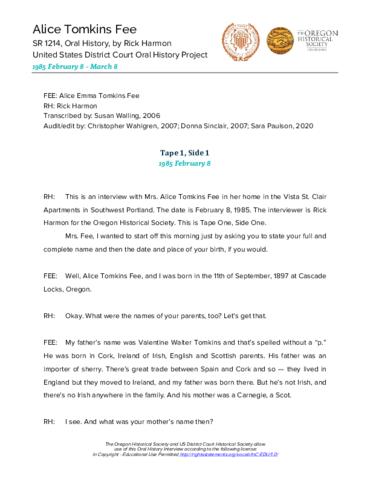 Alice Emma Tomkins Fee was born in Cascade Locks, Oregon, in 1897, and grew up in Portland until the age of 10, when her family returned to Cascade Locks. With few career paths open to women, she chose to attend the Oregon Normal School in Monmouth with the intention of becoming a teacher. She transferred to the University of Oregon and studied music, earning her bachelor's degree in 1924. She was principal at a school in Malin, Oregon; a third-grade teacher in Hood River, Oregon; and principal in Pine Grove, Oregon. She got a job as a typist and stenographer in the clerk's office for the U.S. District Court of Oregon in 1927, and in 1931 she became deputy clerk of the court. In 1939, she became secretary for Judge James Alger Fee. They were married in 1943 and they had no children. They moved to San Francisco, California, when Judge Fee was appointed to the Circuit Court of Appeals. Judge Fee died in 1959. Alice Tomkins Fee returned to Portland around 1978. She died in 1995.

Transcript. This oral history interview with Alice Tomkins Fee was conducted by Rick Harmon in Portland, Oregon, from February 8 to March 8, 1985. In this interview, Fee discusses her family background and early life in Portland and Cascade Locks, Oregon, including her education, her memories of World War I, and the lack of career options available to women. She discusses attending the Oregon Normal School in Monmouth, including her teachers and social life, and studying music at the University of Oregon. She then talks about her career as a teacher and principal at schools in Malin, Pine Grove, and Hood River, Oregon. She also discusses the numerous health issues she’s had over the years. She speaks about working as a typist in the clerk’s office for the U.S. District Court of Oregon, then as a stenographer for naturalization and bankruptcy cases, and then as a law clerk. She discusses the judges she worked with, the Pioneer Courthouse, and the procedures of the court. She speaks at length about her husband, Judge James Alger Fee, including his family background, early life, and judicial career, as well as cases he presided over and her work as his secretary. She discusses the circumstances surrounding Judge Fee’s heart attack in 1959 and his funeral at Arlington National Cemetery. She closes the interview by talking about her activities since her husband’s death, including traveling, cooking and reading.

Joint copyright for this interview is held by the Oregon Historical Society, the U.S. District Court of Oregon, and the estate of Alice Tomkins Fee. Use is allowed according to the following statement: In Copyright - Educational Use Permitted, http://rightsstatements.org/vocab/InC-EDU/1.0/