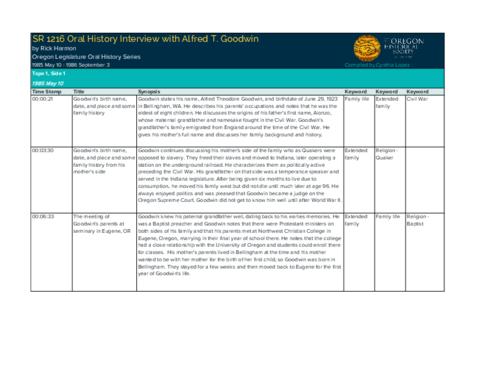 Alfred Theodore Goodwin was born in Bellingham, Washington, in 1923 and grew up in the Pacific Northwest, graduating from high school in the eastern Oregon town of Prineville. Goodwin served in the U.S. Army from 1942 to 1946, and attended the University of Oregon, earning degrees in journalism (1947) and law (1951). Goodwin was appointed to the Oregon Circuit Court for Lane County in 1955, to the Oregon Supreme Court in 1960, to the U.S. District Court in 1969, and to the U.S. Court of Appeals for the Ninth Circuit in 1971. From 1988 to 1991, he served as the Ninth Circuit Court's chief judge. He took senior status in 1991. Judge Goodwin's professional activities have included the Oregon Constitutional Revision Commission, Alpha Tau Omega, the Oregon Bar-Press Broadcasters Committee, where he showed an interest in promoting cooperation between the bar and the media, and the American Bar Association, particularly its committees on relations between bench and bar and on legal education. His support for his alma mater, the University of Oregon, earned him several distinguished service awards.

Index. This oral history interview with Alfred T. Goodwin was conducted by Rick Harmon at the Pioneer Courthouse in Portland, Oregon, from May 10, 1985, to September 3, 1986. The audio for this interview is incomplete; Tape 22 was discovered to be blank in 2020, but its content is represented in both an incomplete transcript and a completed index. In this interview, Goodwin discusses his family background and early life in Bellingham, Washington, and Portland and Prineville, Oregon, including his early education, his memories of the Depression, and life on a farm. He talks about studying journalism at the University of Oregon, including his social life. He speaks at length about his Army service in Europe during World War II, including his experiences in combat and freeing prisoners. He also talks about his marriages and family life. He discusses returning to the University of Oregon to study law, and how his background in journalism influenced his decision-making as a judge. He speaks at length about working for the Eugene Register-Guard newspaper, as well as his support for and later disillusionment with U.S. Senator Wayne Morse. Goodwin discusses practicing law in Eugene. He talks about cases he argued, including as a court-appointed lawyer. He also talks about his involvement in the Republican Party, including serving as a precinct committee member. He discusses serving as a judge on the Lane County Circuit Court, including his appointment and later re-election, cases he heard, and his decision-making process. He then discusses serving on the Oregon Supreme Court, including his appointment and later re-election, his fellow justices, and some of the cases they heard. He talks about opinions he wrote, as well as his involvement in the effort to revise the Oregon state constitution in the 1960s. He discusses the changes in laws regarding the criminal code and civil rights, and how that affected the decisions of the Oregon Supreme Court. He also discusses his views on the Vietnam War, the criminalization of drug use, and the civil rights movement of the 1960s. He discusses serving as a judge on the U.S. District Court, including his appointment and confirmation, his fellow judges, and some of the cases he heard. He discusses serving as a judge on the U.S. Court of Appeals for the Ninth Circuit, including his appointment and confirmation; cases he heard, particularly concerning immigration and anti-trust law; and his opinion on Roe v. Wade. He also discusses the role of the Ninth Circuit Court of Appeals, his fellow judges, and his involvement with the American Bar Association. He talks about continuing education opportunities for members of the judiciary; his children, their careers, and their families; and his involvement with the Presbyterian Church. He closes the interview by discussing his move to California.