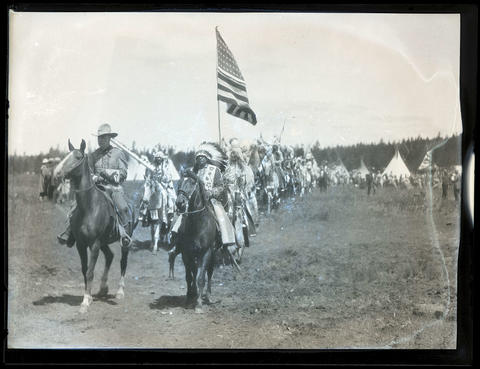 Photograph showing a man dressed as a cowboy and native people from the Umatilla reservation riding in a pageant in Meacham, Oregon, on July 3, 1923. The pageant, attended by President Warren G. Harding and First Lady Florence Harding, was part of events commemorating the anniversary of the first wagon train crossing of the Blue Mountains. The pageant depicted people and events in the history of whites’ arrival and settlement in Oregon. A cropped version of this photograph was one of eight that were published on Page 8 of the Oregon Journal on July 4, 1923, under the headline “Scenes at Meacham Where Early West Lived Again for President Harding and Party.” This photograph had the following caption: “Indians and cowboys parading for benefit of presidential party.” Events at the commemoration also included an address by the president and the dedication of the old Oregon Trail. The Oregon Journal published a story about the commemoration and the Hardings’ Meacham visit, headlined “President Dedicates Oregon Trail in Midst of Colorful Setting,” on the front page of the July 3, 1923 edition. See related image Nos. 371N1048, 371N1049, 371N1052, 371N1053, 371N1054, 371N1055, 371N1056, 371N1058, 371N1060, and 373G0073. Also see image Nos. 371N0140, 371N1047, 371N1050, 371N1051, 371N1057, and 371N1172 from Harding’s subsequent stop in Portland.

Updated with additional references on January 3, 2019.