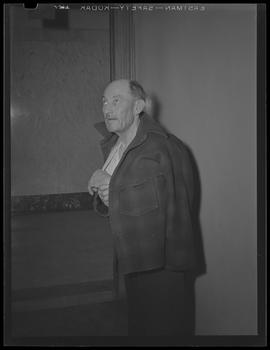 Photograph of Clarence Nortin, looking upward and wearing a jacket slung over his shoulders. Nortin was accused of murdering his 83-year-old mother, Mary M. Nortin in Portland. He was found guilty in May of 1942 and sentenced to 15 years in prison (negative 2 of 2). 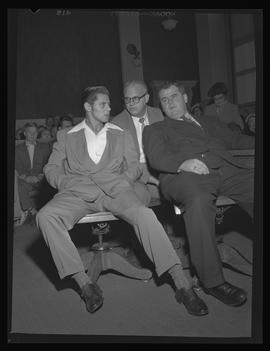 Murderer Morris Leland, hands in pockets, sits with his attorneys, Anthony Pelay Jr. (center) and Thomas H. Ryan (right), awaiting a verdict from a jury during his trial. He was found guilty for the murder of 15-year-old Thelma Taylor and later executed on January 9, 1953 at the Oregon State Penitentiary. A similar photograph was published in the Oregon Journal on Wednesday, November 9, 1949 (negative 1 of 4).