Mr and Mrs. B. F. Boynton with 20-foot-long birthday cake at East Side Commercial Club meeting 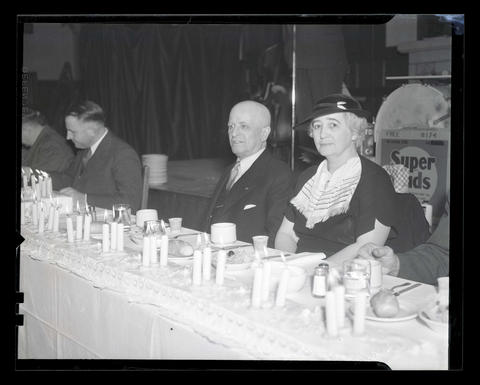 Mr and Mrs. B. F. Boynton with 20-foot-long birthday cake at East Side Commercial Club meeting

Photograph showing Mr. and Mrs. B. F. Boynton sitting at a dining table during a meeting of the East Side Commercial Club in Portland on Wednesday, November 13, 1935. At the front of the table, a huge birthday cake with lit candles is visible. On Thursday, November 14, 1935, a similar photograph, image No. 372A0066, was published on Page 14 of the Oregon Journal. In the caption for that photograph, the Journal reported: “This huge birthday cake, 20 feet long by 8 inches wide, was served Wednesday at the East Side Commercial club in honor of B. F. Boynton, prominent member. The 100-pound cake bore 80 anniversary candles and was presented by Dr. Paul E. Dutton, club president.” Image note: The name “Benny Boynton” is written on the negative and is visible at the bottom of the image.