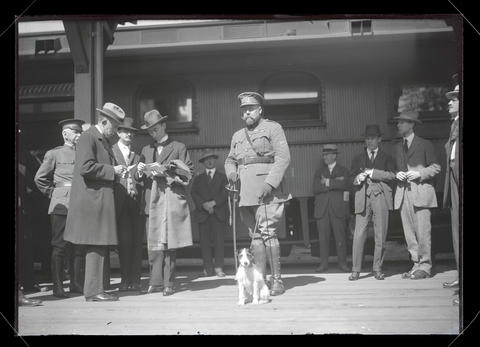 Photograph showing members of the Belgian mission to the United States on the train platform at North Bank station in Portland on Tuesday, July 10, 1917. At center is Major Leon Osterreith, holding the leash of dog sitting at his feet. A cropped version of this photograph was published on Page 11 of the Oregon Journal on Sunday, July 15, 1917, under the headline “Belgium’s Story Stirs Portland.” The photograph had the following caption: “Baron [Ludovic] Moncheur [second from left], head of the Belgian mission to the United States; Hugh Gibson [third from left], representing the state department, and Major Osterieth [sic] with his celebrated trench dog “Nellie,” photographed on the occasion of their Portland visit Tuesday, which was featured by the unfolding of Belgium’s story before the delegates and visitors to the N. E. A. [Nation Education Association] convention assembled in the Auditorium.” The photograph accompanied a brief story describing the reaction to the mission’s address before the convention. See related image No. 376G0208. Image note: The text “Belgian mission” is written on the negative sleeve.